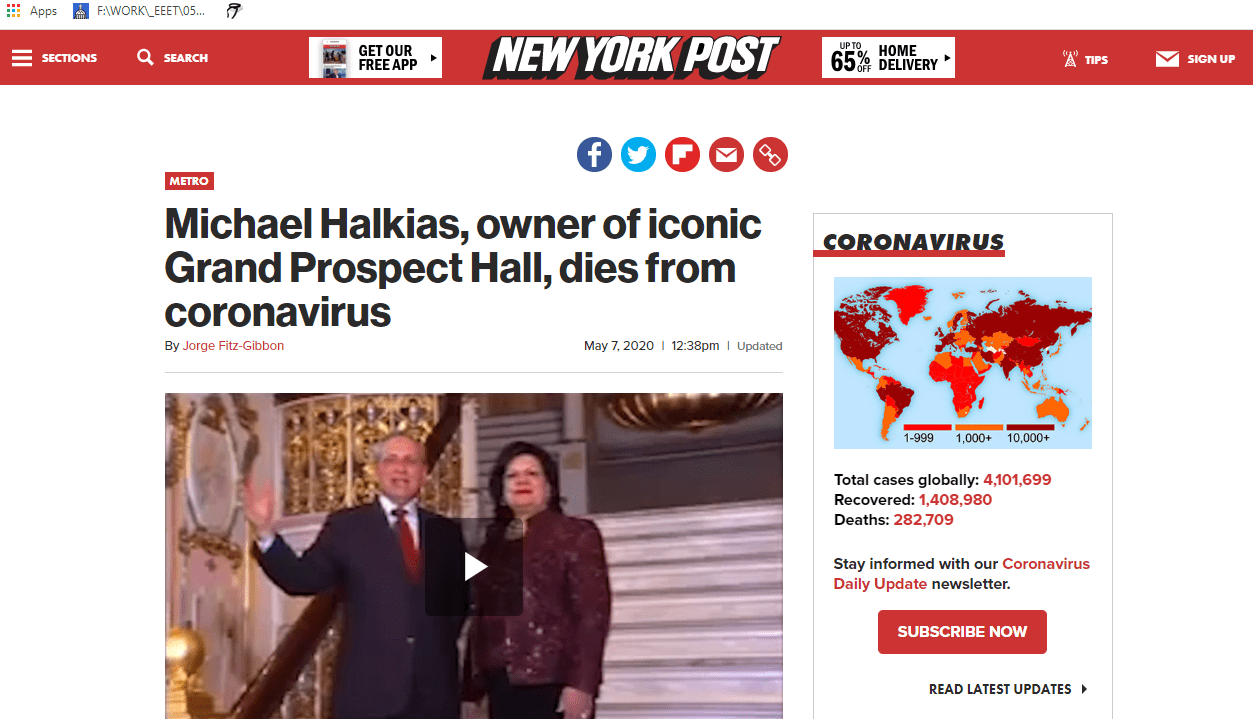 Michael Halkias, the owner of Brooklyn’s iconic Grand Prospect Hall, has died from the coronavirus, according to reports.

Halkias, 82, owned the opulent Park Slope catering hall with his wife, Alice, since 1981. The couple’s TV commercials — capped by the slogan “We make your dreams come true!” — had become so much a part of Big Apple culture that the ads were lampooned on “Saturday Night Live.”

“He was a man with big vision and an even bigger heart,” Gounardes wrote. “And of course, he made dreams come true for thousands of people who celebrated at his hall. May his memory be eternal.”

In addition to the TV commercials, the 1890s hall was used in a number of TV shows and films, including the 2001 hit “The Royal Tenenbaums.” 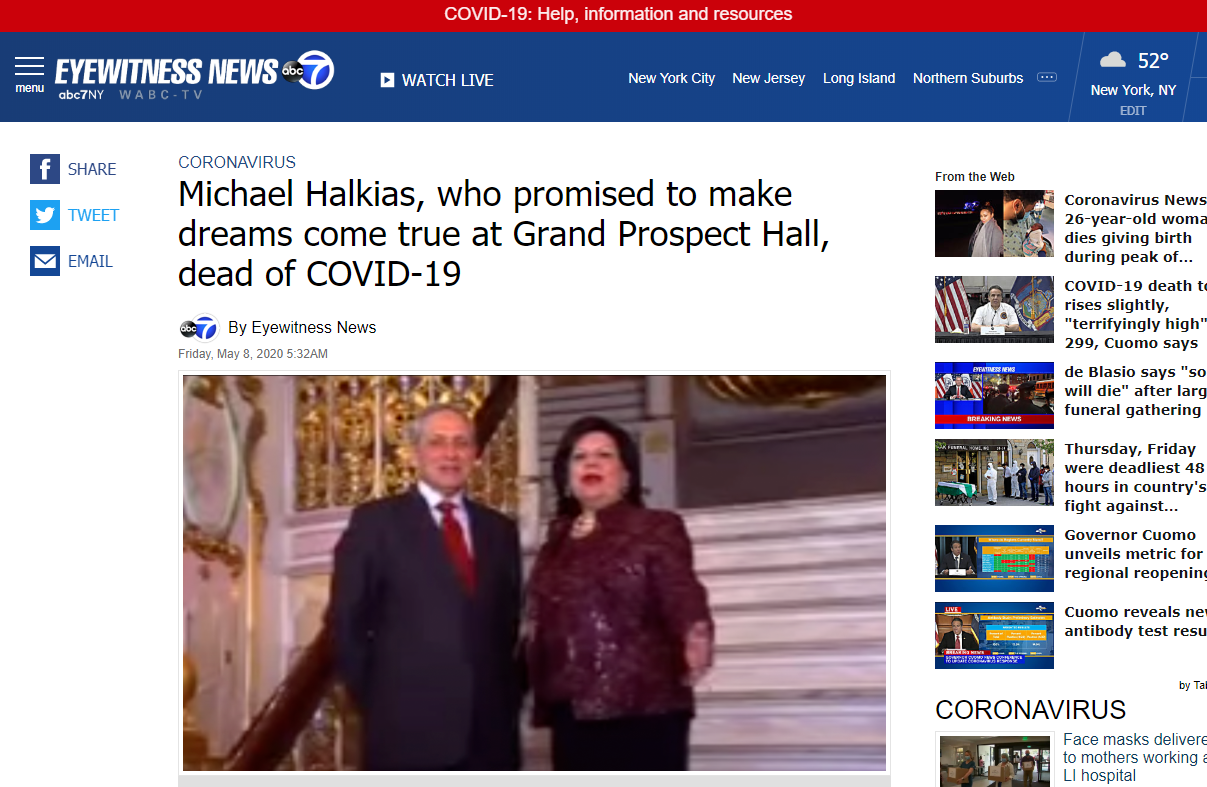 Halkias, who was 82, purchased the Park Slope property in 1981 after a career in areas including publishing, the travel business and real estate. The former German opera house that caught his eye needed a lot of work. His family said Halkias sold all of his real estate to buy the building and lavishly restore it, converting it into a catering facility with a new name, the Grand Prospect Hall.

They created a “42,000 square foot catering facility featuring lovingly and painstakingly restored fin de siecle spaces crowned by the grand staircase” where Halkias and his wife and business partner, Alice, appeared in the commercials, proclaiming “we make your dreams come true.”

The ads became a beloved piece of New York pop culture, much like regional commercials for Carvel ice cream featuring Tom Carvel, or Perdue Chicken, starring Frank Perdue. The memorable ads turned the facility into one that was widely known in the region.

“Together they ran the establishment for 39 years, making realities of the dreams of many brides and grooms and delighted parents, hosting baptisms, bar mitzvahs, graduations, and other milestones for children of all backgrounds and ethnic groups in multicultural Brooklyn and the wider New York area come true,” the family said in a news release.

Halkias was born in Pittsburgh, Pennsylvania and was especially proud of his family’s roots in the Greek island of Chios, and his philanthropy extended to helping the Greek community, his family said.

Halkias’ survivors include his wife and three children.

Among those paying tribute was State Sen. Andrew Gounardes, who tweeted: “He was a man with big vision and an even bigger heart. And of course, he made dreams come true for thousands of people who celebrated at his hall. May his memory be eternal.” 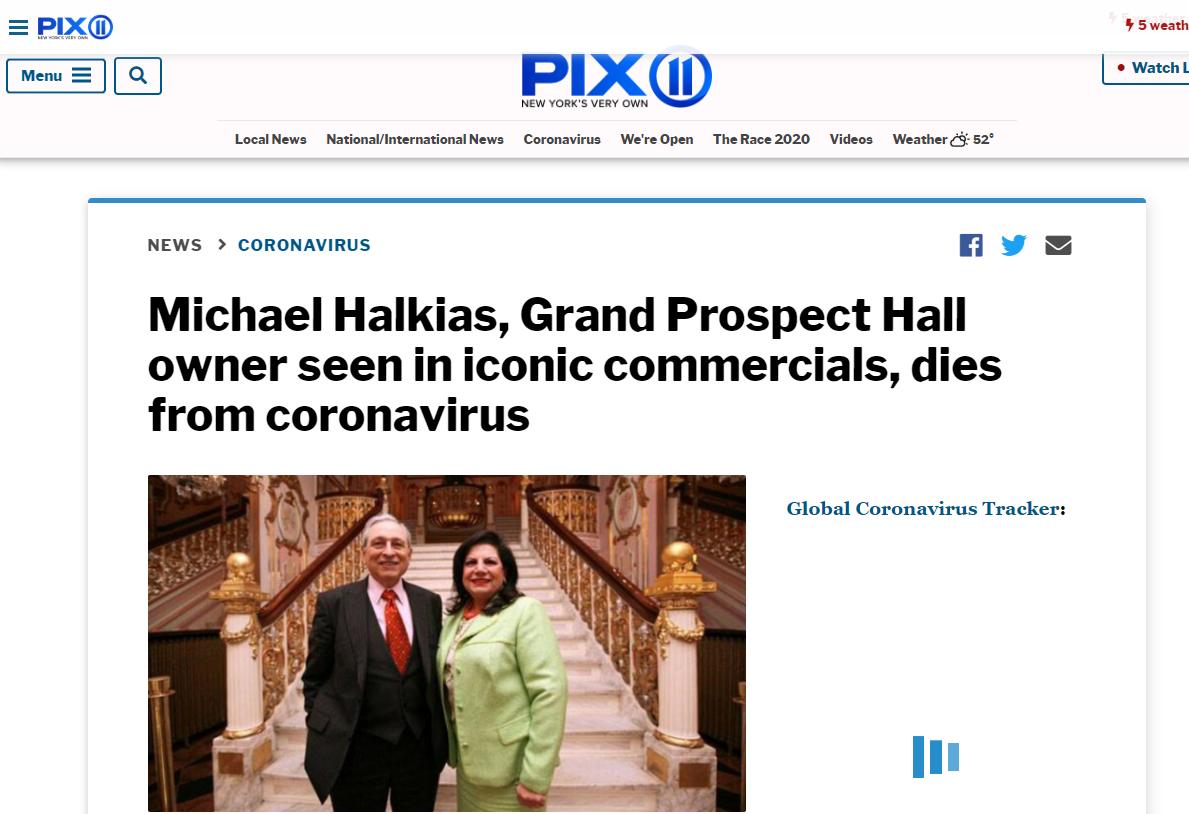 Halkias died Wednesday, the news shared by New York Senator Andrew Gounardes on Twitter, who remembered the businessman as a “man with a big vision and an even bigger heart.”

“He made dreams come true for thousands of people who celebrated at his hall,” Gounardes wrote. “May his memory be eternal.”

Halkias is best known to most New Yorkers for the catering hall’s arguably iconic local television commercials, in which he appeared alongside his wife Alice, who famously exclaims, “We make your dreams come true!”

Greek news outlet Anamniseis posted of Halkias’ death on Facebook, writing in Greek that he was “defeated by COVID-19.”

Halkias owned the lavish Park Slope hall with his wife since 1981, according to the New York Post.

Grand Prospect Hall and its TV ads are so synonymous with New York that they were spoofed by “Saturday Night Live” last year. 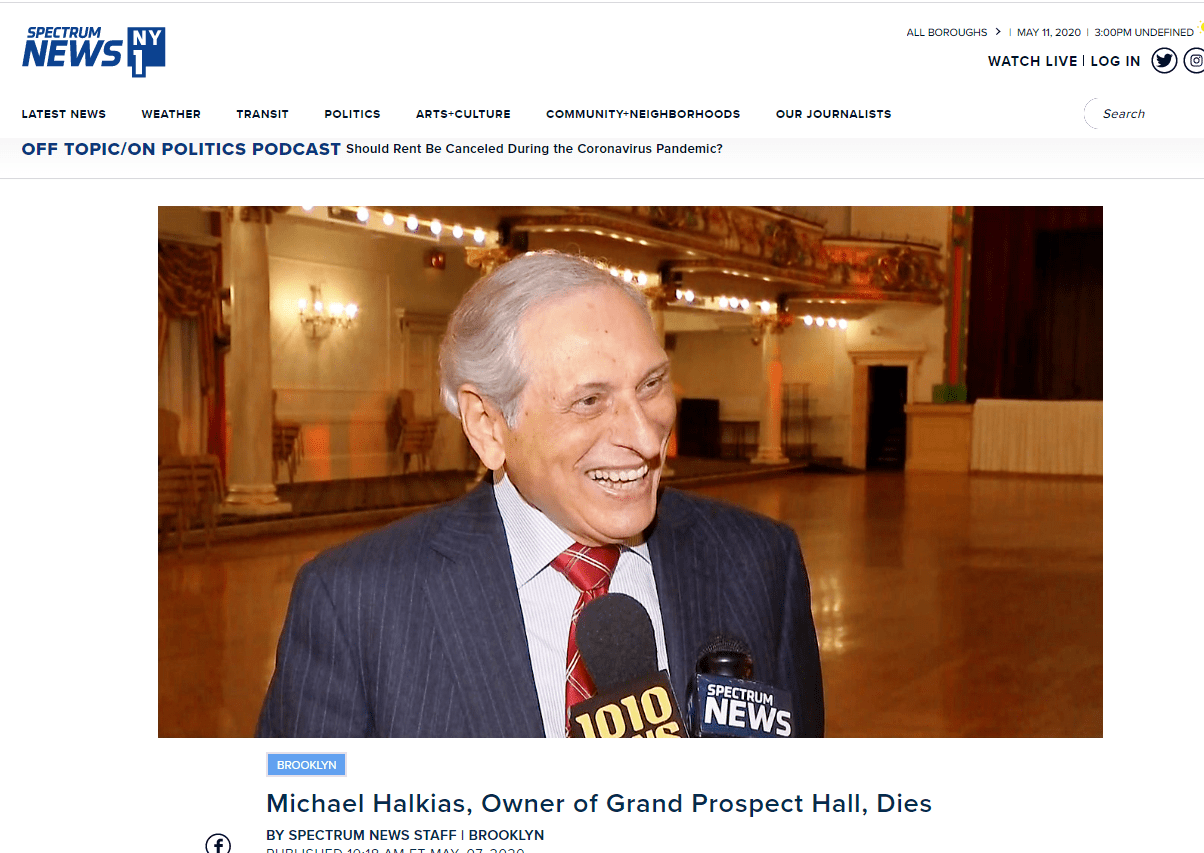 Michael and his wife Alice have owned the hall in Park Slope since 1981.

Their TV ads became so well-known that they were even spoofed by “Saturday Night Live” last year.

Many remember hearing the line “We make your dreams come true,” which aired on NY1 for years.

State Senator Andrew Gounardes reacted to Halkias’ passing on Twitter saying, “He was a man with big vision and an even bigger heart. And of course, he made dreams come true for thousands of people who celebrated at his hall. May his memory be eternal.” 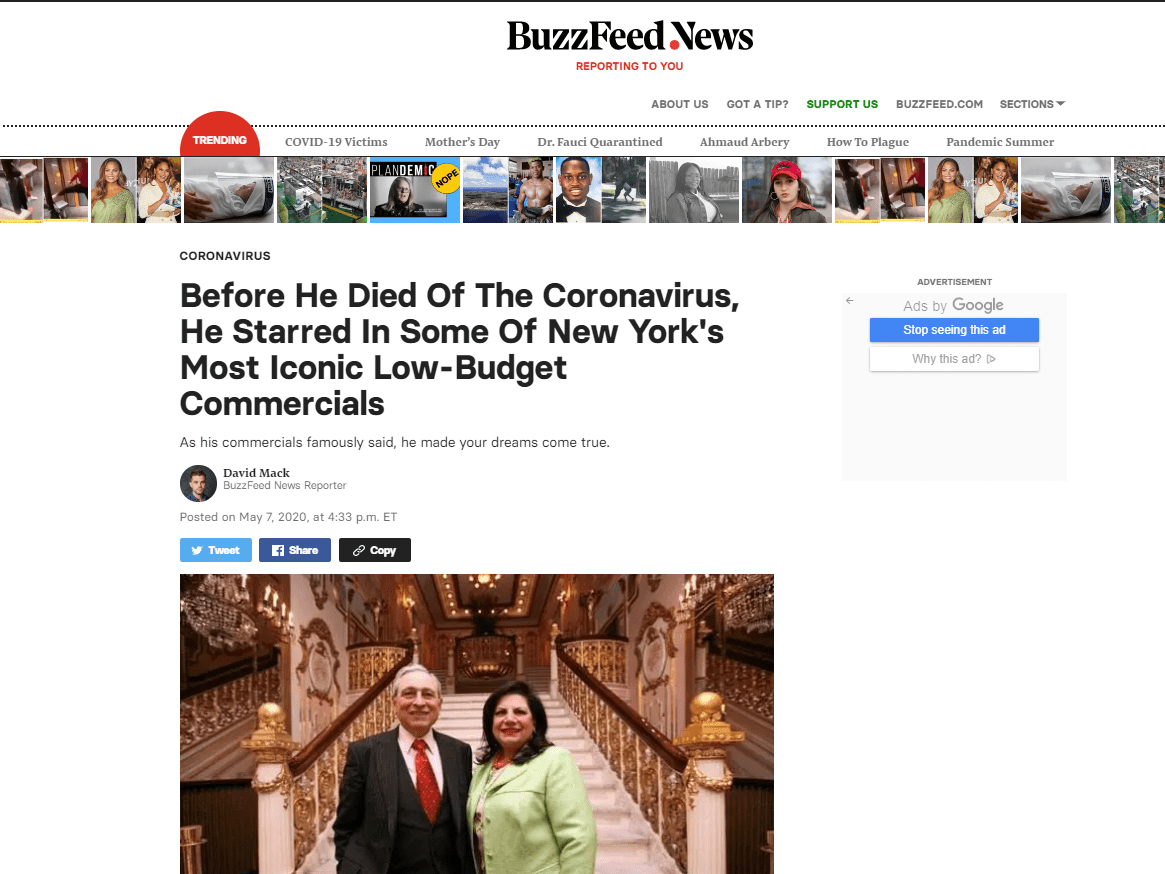 Before He Died Of The Coronavirus, He Starred In Some Of New York’s Most Iconic Low-Budget Commercials

Michael Halkias — who, along with his wife, became a minor New York celebrity due to long-running commercials for their Brooklyn wedding venue, Grand Prospect Hall — died Wednesday from the coronavirus. He was 82.

Halkias died at Lennox Hill Hospital in Manhattan, widow Alice Halkias told BuzzFeed News. He had first exhibited symptoms of COVID-19 on April 1 and was taken to the hospital a few days later after suffering issues with his lungs and kidneys. He spent two weeks on a ventilator prior to his death.

“We had a great life, and he was the best husband I could ever imagine,” said Alice, 73, in a phone call. “Even though we were working together all these hours, we always worked beautifully together.”

His death was first reported by the Greek community website Anamniseis.

The couple first purchased Grand Prospect Hall in 1981. The building had been constructed as a French Renaissance–inspired entertainment hall in Park Slope in 1892 — originally designed by architect Ulrich J. Huberty, who was also behind the nearby Boathouse in Prospect Park — but had fallen into disrepair by the 1980s.

“My husband had a great vision the moment he walked into the doors,” recalled Alice. “He saw the staircase, which was painted white at the time, and he started jumping and said, ‘I have to buy this building and fix it for New York to enjoy it.’

“He said, ‘I have to do it. Brooklyn needs this building.'”

Once refurbished, low-budget commercials advertising Grand Prospect Hall ran dozens of times a day on TV in the New York area. Using Antonio Vivaldi’s “The Four Seasons” as an earworm, the unforgettable ads featured dizzying camera work showcasing the gilded concert hall and its glittering chandelier. Memorably starring the Halkiases themselves, each spot ended with the married owners standing on their grand staircase and proudly announcing, “We make your dreams come true!”

“We became sort of celebrities,” Halkias recalled to BuzzFeed News in an interview last year for the Facebook Watch show That Literally Happened. “What you hear all the time is, ‘We grew up on your commercial!.'”

“Some people despise the commercial. They don’t like it — one percent, two percent [of people]. That’s because they are jealous. They hate it because it’s simple,” he added. “But that’s OK because I’m running all the way to the bank happily!”

Daughter Josephine Halkias-Tsarnas, 52, recalled an early commercial her family made featuring footage from her real wedding.

“I was the first spinning bride,” she told BuzzFeed News. “People would stop us in the street for an autograph and we thought it was so ridiculous!”

The ads were even spoofed on Saturday Night Live with Kate McKinnon playing a character named Cosmo Sparadukis who was clearly inspired by Halkias.

When talk show host Jimmy Kimmel filmed special episodes of his show last year in Brooklyn, he recruited New York Mets player Pete Alonso to join the Halkiases in a skit for a new commercial.

Born in Pittsburgh in 1937, Halkias moved with his family to Greece when he was 2 years old, returning to the US when he was 18. Raised as an altar boy in the Greek Orthodox church, he had ambitions to join the church, and even studied as a theologian, but found himself drawn to the world of business.

In the mid-1960s, when Alice was 20 she walked into a travel agency to buy herself a plane ticket to Greece and encountered a handsome 28-year-old manager: Halkias.

“I just saw him as a great person,” she said. “When I was in Greece, I was thinking of him a lot. When I came back, he asked me to marry him. I couldn’t believe it. I accepted right away.”

In addition to their daughter, the couple had two other children, five grandchildren, and one great-grandchild.

Josephine Halkias-Tsarnas told BuzzFeed News her father was a hardworking, funny, and sensitive man who would always support his three children. She began working for her parents’ company when she was just 14, learning skills that serve her to this day.

“He was definitely my idol,” she said. “He taught me everything I know. I was his right-hand man for many years. I went on to real estate and took everything he taught me with me.”

Josephine said he would often spout “words of wisdom” that she now intends to print and frame. Her favorite? “There’s no time to be tired.”

Just in February, she surprised her parents during their vacation in Aruba, relaxing while her father insisted on exercising each day in the hotel gym.

“It was the three of us for a week,” she said. “I never would’ve imagined in two months there would be a pandemic and it would take so many lovely lives and my father would be one of them.”

In addition to a wedding venue, Grand Prospect Hall has served as the site of concerts, fashion photo shoots, and film and television productions. Multiple celebrities and filmmakers also visited the hall over the years, including John Huston and daughter Anjelica, as well as Francis Ford Coppola.

But Alice Halkias told BuzzFeed News that whenever most people who were familiar with the commercials enter the building, they still walk to the marble staircase, throw their hands in the air, and try to imitate her commercial catchphrase, “We make your dreams come true!”

“I couldn’t believe that we would get into the catering business and we would become so famous,” she said.

“He was — believe it or not — a very humble man,” added Josephine. “He wouldn’t want people to feel sorry. He was very happy.” 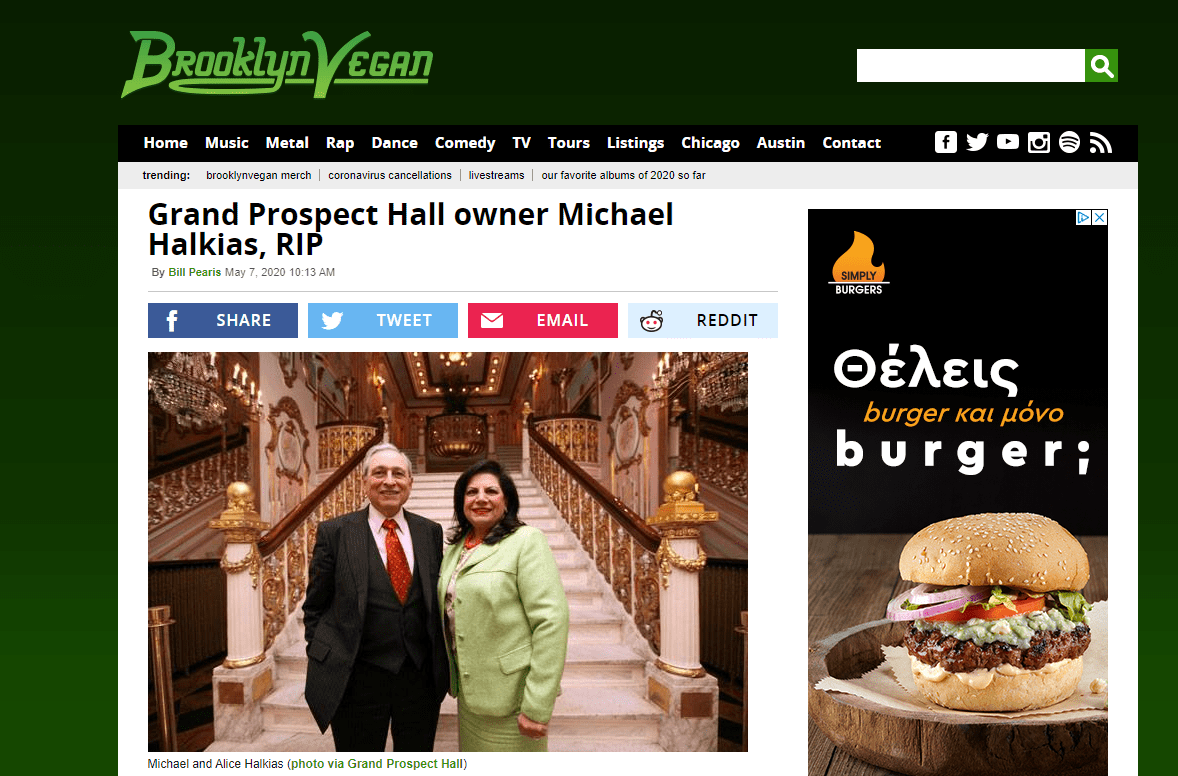 We were very sad to hear that Michael Halkias, owner of Brooklyn’s iconic, opulent event space Grand Prospect Hall, died on Wednesday (5/6). He was 82. Greek news site Anamniseis confirmed the sad news; the article was in Greek but on Facebook they wrote, translated, “Gentleman, businessman, benevolent and lover of Greek education Michalis Halkias was defeated by korōnoïó [COVID-19].” New York State Senator Andrew Gounardes tweeted last night, “Really saddened to hear that Michael Halkias, owner of The Grand Prospect Hall, passed away. He was a man with big vision and an even bigger heart. And of course, he made dreams come true for thousands of people who celebrated at his hall. May his memory be eternal.”

Most New Yorkers know Halkias from Grand Prospect Hall’s equally iconic local TV commercials where he and his wife, Alice, proclaimed “We make your dreams come true.” (SNL and Jimmy Kimmel Live have lovingly parodied them over the years.) The Halkias purchased the turn-of-the palace in 1981 and opened in 1985. In addition to weddings and other celebratory occasions, Grand Prospect Hall has hosted concerts over the years as well: Arcade Fire celebrated the release of Everything Now there in 2017 and Hot Tuna played there earlier that same year; DFA held their 12th anniversary blowout there in 2013; and many editions of the Zlatne Uste Golden Festival have been held there over the years. It’s also been a location for 30 Rock, Gossip Girl, The Cotton Club, Prizzi’s Honor, The Royal Tenenbaums and other film and TV productions.

Rest in peace, Michael. We’ll see you in our dreams. Watch a few of Grand Prospect Hall’s commercials from over the years, and a gallery of photos from the Arcade Fire show, below.