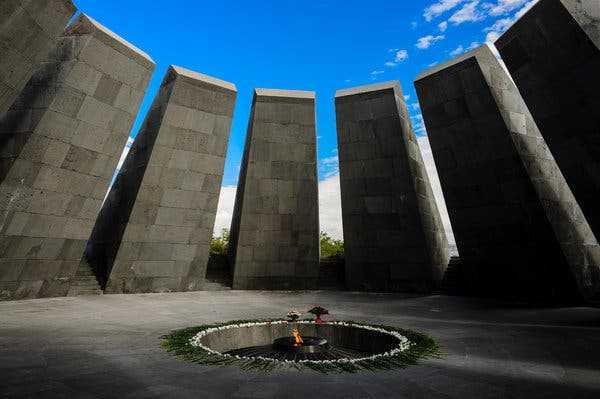 Affirming the United States record on the Armenian Genocide.

IN THE HOUSE OF REPRESENTATIVES

Affirming the United States Record on the Armenian Genocide.

Whereas the United States has a proud history of recognizing and condemning the Armenian Genocide, the killing of 1.5 million Armenians by the Ottoman Empire from 1915 to 1923, and providing relief to the survivors of the campaign of genocide against Armenians, Greeks, Assyrians, Chaldeans, Syriacs, Arameans, Maronites, and other Christians;

Whereas the Honorable Henry Morgenthau, United States Ambassador to the Ottoman Empire from 1913 to 1916, organized and led protests by officials of many countries against what he described as the empire’s “campaign of race extermination”, and was instructed on July 16, 1915, by United States Secretary of State Robert Lansing that the “Department approves your procedure … to stop Armenian persecution”;

Whereas Raphael Lemkin, who coined the term “genocide” in 1944, and who was the earliest proponent of the United Nations Convention on the Prevention and Punishment of Genocide, invoked the Armenian case as a definitive example of genocide in the 20th century;

Whereas, as displayed in the United States Holocaust Memorial Museum, Adolf Hitler, on ordering his military commanders to attack Poland without provocation in 1939, dismissed objections by saying “[w]ho, after all, speaks today of the annihilation of the Armenians?”, setting the stage for the Holocaust;

Whereas the United States has officially recognized the Armenian Genocide, through the United States Government’s May 28, 1951, written statement to the International Court of Justice regarding the Convention on the Prevention and Punishment of the Crime of Genocide, through President Ronald Reagan’s Proclamation No. 4838 on April 22, 1981, and by House Joint Resolution 148, adopted on April 8, 1975, and House Joint Resolution 247, adopted on September 10, 1984; and

Whereas the Elie Wiesel Genocide and Atrocities Prevention Act of 2018 (Public Law 115–441) establishes that atrocities prevention represents a United States national interest, and affirms that it is the policy of the United States to pursue a United States Government-wide strategy to identify, prevent, and respond to the risk of atrocities by “strengthening diplomatic response and the effective use of foreign assistance to support appropriate transitional justice measures, including criminal accountability, for past atrocities”: Now, therefore, be it

Resolved, That it is the sense of the House of Representatives that it is the policy of the United States to—

(1) commemorate the Armenian Genocide through official recognition and remembrance;

(2) reject efforts to enlist, engage, or otherwise associate the United States Government with denial of the Armenian Genocide or any other genocide; and